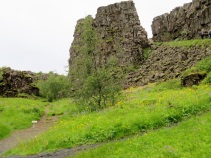 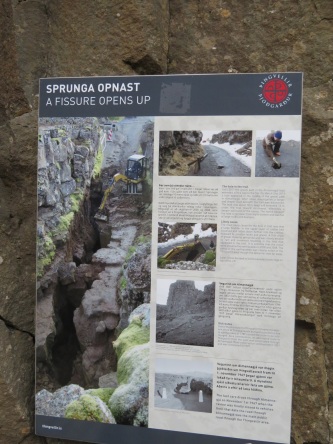 Wow, that is a big waterfall 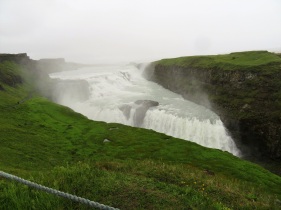 Wonder what the rock is? 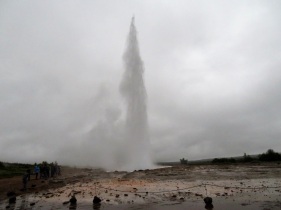 Can you see the face? 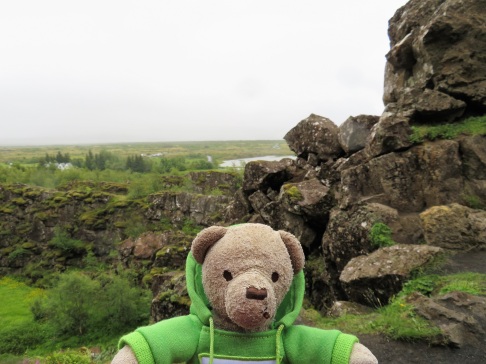 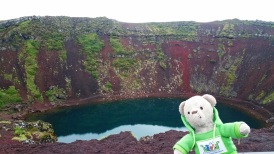 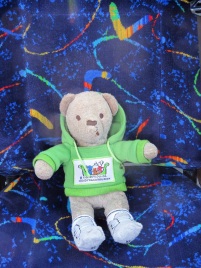 Down into the earth 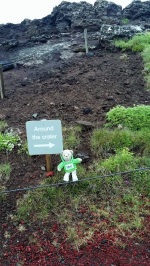 I was eager to do a few things in Iceland: going on a tour of Iceland, seeing puffins, and trying new food. I was going on my first adventure with my friend, Edward. Edward is older than me, and wiser.

I first went on a trip called the Golden Circle Express with Gray Line Tours.  You see, Iceland has glaciers and volcanoes.  It is also between the North American and Eurasian tectonic plates.  The volcano causes geysers, the glaciers cause waterfalls and the tectonic plates are great to study for geology.

First, I would see where the tectonic plates meet.  Then, a waterfall, geysers, and the guide said a crater and drive!  I would return around 12:30 AM! Since, Iceland is almost in the arctic which is bright all day long and most of the night.

We hopped on the little tour bus and off I went.  The tour guide said the glacier’s water went to the waterfalls and there was no steam, only mist.  I guess the water would be really fresh if it’s from a glacier.  He said the tectonic plates meet so one second you are in North America and the next thing you know, you are in Europe!  I thought it was pretty cool!  I was eager to see some cool things.

Where the tectonic plates meet, in Þingvellir National Park, is awesome!  It feels like you are exploring a sci-fi movie scene. Lots of birds live there and there are different kinds of plants too.  There are lots of bridges and planks. It was nice to walk in.  I like nature trails and it was really nice. In the past, people from various Icelandic tribes sent people there once a year to say what the people of their tribe wanted.  They would vote, settle disputes, party and then go home.

I could see houses and I think there were ducks! The rocks looked thick and where the plates meet is crazy!  The rock goes down, down, down.  I felt small and useless next to such big things that are so powerful.  There had been horses on the way there, lots of horses. They were a breed of horse that only exist in Iceland.

Next, was my first waterfall, called Gullfoss.  It was supposed to be big.  I was warned to be careful walking as the mist of the water made the wood or metal of stairs and planks, and rocks slippery.  There were lots of puddles too, and the mist made it hard to see was a serious safety hazard.

The waterfall was massive.  I kept thinking the mist was steam like from a hot spring and I wanted to dive in and swim around.  But, I managed to remind myself the water was from glaciers, which are giant ice cubes!  So, if you go, be careful not to jump in or slip.

After, I was going to see geysers. Geysers are holes in the earth where hot and cold water meet and it causes a reaction that shoots water up in the air.  It makes a loud noise that is startling.  I did not like the active geyser.  You see, if the water touches you, you have a serious problem.  The water is scalding!  Most of the geysers don’t spray water anymore and look amazing.  It’s like a nice hole with water; but the water does not drain away!  The holes were different colors too. One of the quiet geysers water bubbled from the heat.  So, it was nice.  The geyser that erupts, Strokkur, does so every 7 minutes!  But, the eruption lasts for like 2 seconds.  So, getting a picture is the ultimate challenge.  Interestingly, the word geyser originated from the Icelandic name, Geysir, which is the name of one of the dormant geysers. But, I, being an incredibly genius bear, already knew this.

Next, I would see a giant crater that had been a volcano; but no longer erupts.  The crater was filled with water from the rain.  I recall that the guide told me, when I asked if there had been dinosaurs on Iceland, that it was a newer island; so they couldn’t have lived there.

I had seen something strange on the drive back to Reykjavik.  It looked like a giant marshmallow!  Then, another and another!  It was hay in gray, pink and white bags!

So, that was the golden circle tour.  I hope that you enjoyed it a lot.  So, remember the information and try to go on this tour.

5 thoughts on “Geysers and Rocks and Waterfalls, Oh My!”