Hello again. I want to tell you about Open Ark Farm, it’s a farm about 20 minutes outside of Belfast. Once I got there we went to pay and get in. There was a dog that looked like a Border Collie sleeping under the desk. It was very cute and soft, so I knew I would fit in. We got feed for the animals too.
After leaving the office I saw I Chocolate Lab, who I also petted. The next animals were two mother cows with their calves. The cows were VERY curious about the food I had; however, they drooled a bucket’s worth. The calves were too busy sleeping to get up. After, there were two sleeping pigs. When I went to the next section there were alpacas, which are a cousin of lamas. They were friendly and interested in the food. The rabbits and Guinea pigs were busy snoring the day away. A baby lamb had somehow snuck out of its pen, it was cute, soft, and curious. I managed to get a picture with it, and it didn’t mind my presence.

Map of the farm

If you can’t walk, here is a way to get to end of the farm

A new calf and her mom 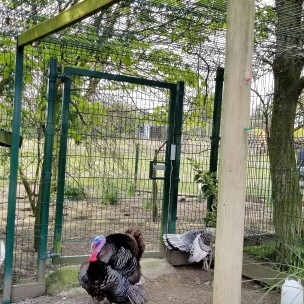 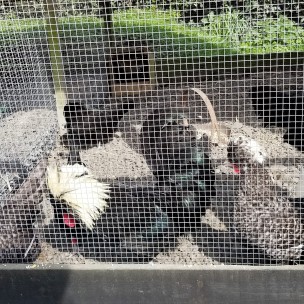 Proud as a peacock

Gift shop
Next were a bunch of chickens who showed their dissatisfaction by making a lot of noise. Some of them looked like African warriors with their wild head feathers. There were a group of silver chickens too, when I tossed them feed some landed on a chicken’s back. The other chicken pecked the food right of its back! Across from the chickens there were two female and one male peacock. The male had brilliant tail feathers. The last in that section was a pair of horned owls. Since owls are nocturnal, they looked half-asleep.
I went further down the farm and found the duck pond. There was a pair of black swans at the back of the pond, and a group of noisy geese. They were kind of annoying with their squawking. The ducks were being quiet and raced each other a few times. The most intimidating of them all was a goose sitting on the ground. Its eyes were creeping me out, so I decided to move on. 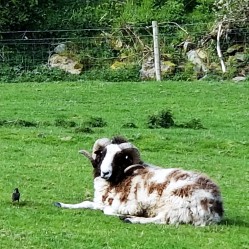 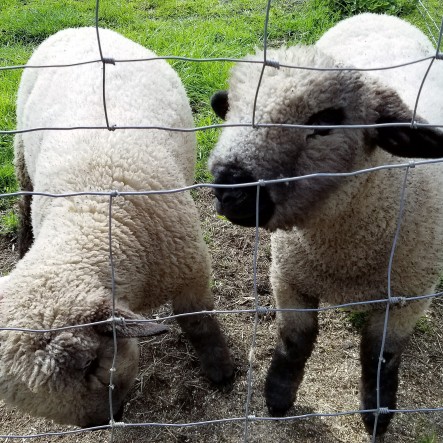 These sheep were so nice

A. let me get really close to this baby chick

All 3 houses and the wolf

Doors that are just my size

Now this is a ride!

Rapunzel book
Next up there was a flock of sheep and lambs with a ram in the center of the field. The ram didn’t move, but the sheep and lambs moved around through the grass and tried to get people to feed them. Back down the path there were deer. They were very timid but that didn’t stop them from eating the food. They looked fragile and delicate.
After there were donkeys, who I both fed. Finally, I arrived at the other end of the farm, there were two paths. One lead to a short path with dinosaur models and plates describing them. The other lead you through a few classic fairy tales like Rapunzel, the three pigs, etc.… there were a bunch of small fairy doors in trees in along that path too.
On the way back out I stopped by to see the goats again. I found one of the baby goats sneaking out, I said hello and it hopped into a stroller outside! It didn’t want to leave either. After I went to get lunch at the café they have there. While I was looking at the menu the goat walked right in! One of the staff members chased after it, and he hid under the tables so she couldn’t get him. She managed to chase it outside where he belonged. When it was time to leave the goat took a picture with me.
I recommend going to the Open Ark Farm if you are in the area, it was lots of fun. Until the next post!

Do you think they’ll notice?

Well, it says its made for kids…

Donkey at the farm

Lunch time for donkeys too

Sure, this blog is about the travels of a really cool bear (if I do say so myself). But, as long as you have a big heart and want to learn about the world as I travel, you are welcome here! A. would tell you that I'm her very best friend. But, she has lots of other friends too: humans, dolls, bunnies, dogs, cats and even dragons! So, you're welcome here, whether you have skin, scales or fur!
Loading Comments...
Comment
×
%d bloggers like this: