If you haven’t read Part One of Crazy K-con, be sure to read it first by clicking here! 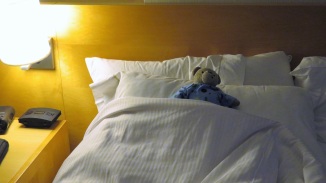 The next morning, I woke up bright and early after a good rest. I planned to do a few things at K-con: go to a some presentations and look around a little to see what else there was to do.  After picking up my wrist band, which was squeezing g the life out of my paw because I put it on too tightly; I waited in the security line to have my best friend’s bag checked.  I leapt down, because I wanted to look around too! The line went into the street.  I don’t know why the line was taking so long to move; but it felt like the earth was standing perfectly still.

Finally, while I was chasing away a wasp, I felt the ground move.  Actually, I was on top of my friend’s head and the line was finally moving.  I knew how fast I was moving because there had been a napkin on the ground where I was standing and I could tell how fast the line was moving based on my distance from the napkin.  I took a nap, and when I opened my eyes, the napkin was nowhere to be seen.

What I did see though, were a bunch of funny looking booths.  All of them had interesting items; but it was hard to focus.  I was going to a talk and had to wait for lunch.  I hadn’t had breakfast either; so I was in a cranky mood.  Being on top of my friend’s head, I could see everything.  When it was time to go to the talks, I saw a few security guards with phones who would scan our wrist bands.  After they were scanned, I went up the escalator.  I called out “onward!” and went on to the room.

I sat quietly as I waited.  I thought it was kind of weird that I was the only animal in the room.  The talk was by Hyunwoo Sun, of Talk To Me in Korean, a website where you can learn Korean.  It was about how to learn Korean faster.  At the end of the talk, I even got to take a picture with him and told him about how wonderfully I was doing in learning Korean. 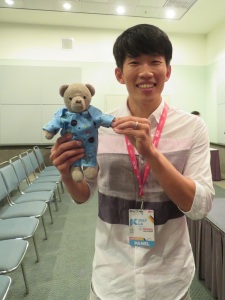 I ate my lunch at the food court and went upstairs to hear the next speaker on my list, Mrs. Hwasook Jeong.  It was about the 10 foods that are going to be served at the 2018 Winter Olympics in PyeonChang, Korea.  At the end of the talk, they said something wonderful.  They were going to give me a bulgogi burger with japchae.  It is basically, bulgogi (meat marinated in a delicious sauce) that was put into a burger bun with lettuce and mustard; and japchae (Korean glass noodles with vegetables).  Even though I had just had lunch, it would have been wasted to not eat the bulgogi.  I also snuck a bite of my friends’.  It was very tasty!  But, it was my job to eat the samples that were so politely given to me. 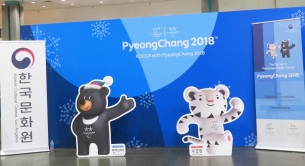 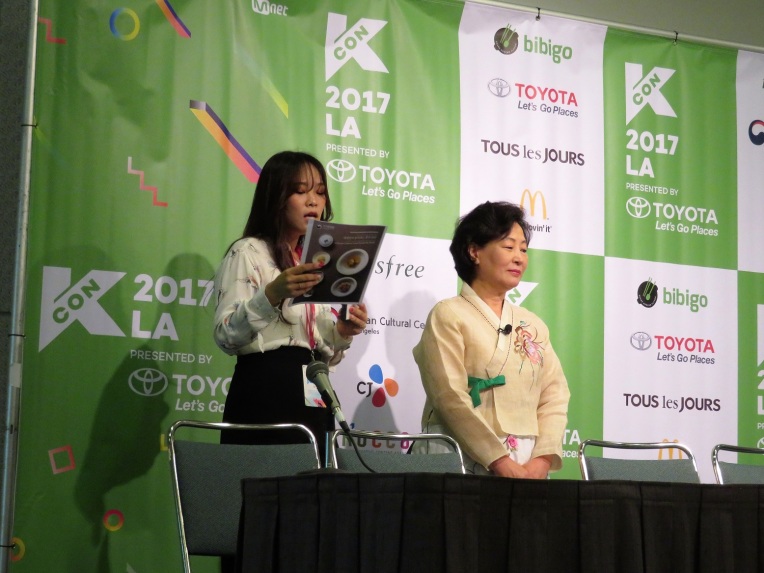 After, I went to learn how to make kimbap, which is a seaweed wrap with rice and the filling. It is kind of like sushi; except, it can have meat, cooked fish or just vegetables.  It would be fun to experiment with what you could put in as a filling.  I urged my friend to learn how to make it, as that means more food for me.  When the presenter, Cecilia Hae-Jin Lee, asked for volunteers the second time around, I shoved her hand in the air.  She learned how to make it and I’ve already tried it now.  So, she’d better start practicing.  But, my stomach can be the trash bin as she’s learning.  Nothing should be wasted after all.

There were lots of things in the main hall.  There were even a few places where you could dance or go to watch new Korean dramas.  I was surprised that there was a booth where you could buy purses.  Maybe one day I’ll buy a backpack for my best friend; since it would be like being in a new car for me.

There were food booths, beauty product booths where you could try on different things and there was even a booth where you could get crazy hand-made furniture for your cat!  I might have fit in it; but I wasn’t going to test.  I’m pretty sure that a small dog could have fit there too.  Many of the booths had games to play so that you could earn prizes or free merchandise.   You could buy posters, CDs and various other items.

One the way back to the hotel, my friend said that even though I was too small, I could share a jersey that had a group’s logo on it.  I was happy.  I like SF9’s music and the jersey had Seventeen’s logo, whom I also like.  I was also glad that she suggested we pick up food and eat it on the way back.

Voting for actors, Pick me! 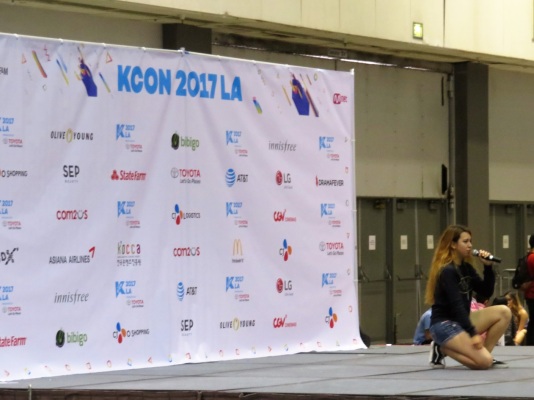 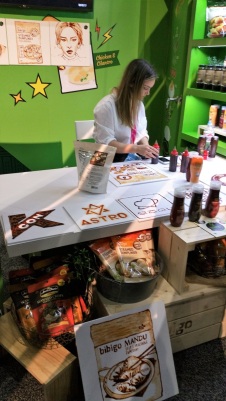 Lots of games to play

On the last day, we stopped at K-con for the last time to learn how to make another kind of food.  It was the same presentation as the day before, for the 2018 Olympic games.  But, they told us how to make a new dish and at the end, I even won a prize by answering a question!

I love my prizes

I’m pretty tired, but I can’t wait to go back to Koreatown.

Maybe next time, you can go to K-con since it isn’t very expensive to go and they are held in various places.