After the Vatican City, I drove to Pompeii.  When I arrived in Pompeii, I got to my hotel, received my key and went to my room.  I left my stuff and went to dinner.  The food was amazing.  I ordered pizza, since I was at the best place to eat pizza in the world.  Because pizza was invented just outside of Pompeii, in Naples.  After eating my dinner, I went to my room.  But here is a little something about my dinner, that you may not have realized.  You see, the Europe Cup was on, which is a huge soccer game.  It is a huge series of games and the winner is supposedly the best team in Europe.  It turns out, that it was the final game.  Although, you would have figured this out by hearing the people watching shout.

So, the next morning, I headed out to see the Pompeii ruins.  I walked to the ruins and got my map. The ruins of Pompeii were of the old city when the local volcano, Mount Vesuvius, erupted, covering them all in ash.  And I mean, everything, in ash.  The people were buried, the food and everything else.  So, imagine eating your lunch or walking your dog, and suddenly being frozen in place.

I cleared away my thoughts and fears about what it might be like inside and walked in.  It turns out that the ruins are open air; so, you can get fresh air, no problem.  The first thing I saw was an old coliseum.  It was sort of like being in half of a cylinder.  I felt like I wanted to climb up and watch the action that would have gone on inside.  I finished looking at the coliseum and walked out.

The next place that I went to had old paintings that were put on the walls of the buildings. They are called frescoes. My best friend told me that assembling them would be like putting together a giant puzzle.  Some of the other things that they had were old jars and pots.  They even had food, like nuts and fruit or bread that were buried in the ash from the volcano.  You can imagine would have been cool to discover food that was thousands of years old.  I guess that is what the people who found it thought, because it was on display.  The other thing about finding food that is so old is that usually food like that would rot away, especially something like fruit.  So, it is a big find.

After looking at all of the objects and food from the homes, I went to look at where the people would have lived their daily lives: the roads and the buildings.  The streets were also, surprisingly smooth.  Sure, there were a few sharp edges; but after all, they are rocks. There were deep lines from the wheels of chariots that would have rolled on the stones.  After years of chariots rolling on the stones, they made deep creases or marks.  The buildings were just as interesting as the roads, or even more.  Some of the buildings had counters made of marble.  I guess someone could have used these counters to sell juice or water.

Afterwards, I left Pompeii and got into my car.  I drove to where I’d get on my ferry, waited a while and then took my ferry.  After landing in Sicily, I drove a little more and went to where I’d be staying.  I hope that you enjoyed my post.  And as usual… until the next post!

I climbed to the top!

Mt Vesuvius from my hotel

Taking a little break in the shade 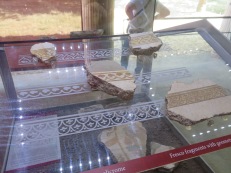 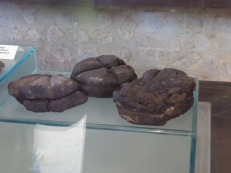 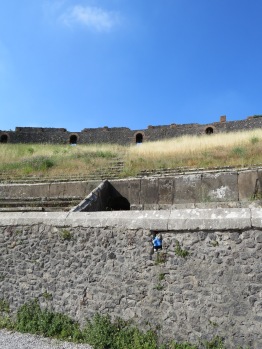 The place of excitement

Wheel marks on the road 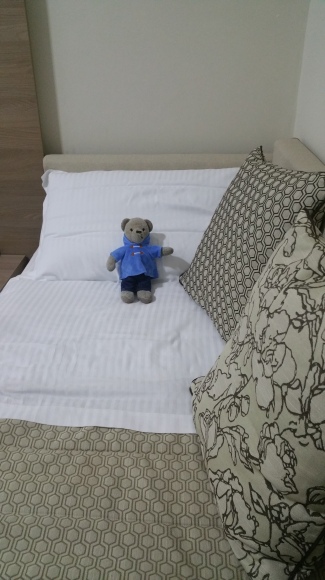 My comfy bed in Pompeii

Road of the merchants