Today, I am going to talk about Little Tokyo.  Tokyo is a very large city in Japan.  A big city, for it is the capital of Japan.  Now that you know what Tokyo is, I want you to know what Little Tokyo is.  It is a neighborhood in Los Angeles.  It is not as small as many neighborhoods however.  It even has a museum!  I went to Little Tokyo when the French guy, (mentioned in “Voting in L.A.”), went to vote in L.A. again.  And get this: the lady who said that she would vote for me to be president recognized me (again, from “voting in L.A.”. You should read it!)!

Because we were in the area, we went to Little Tokyo.  I looked pretty snazzy, if I do say so myself.  When you enter the Little Tokyo neighborhood, there are these tall sort of towers with a temples roof on top.  You know the Japanese temple, you have probably seen pictures of them in a history book.  Next to the tower there is a sign saying “Little Tokyo”.

Little Tokyo has lots of little shops.  At the entrance or near it, there is the Japanese-American Museum.  It has a giant Rubik’s cube that has large stickers showing what is inside.  They change these stickers.

We parked and got ready and I made my fur look smooth for my adoring fans.  We hopped out of the car.  I walked around the first shop which had things from video games and anime.  They had hats from “Pokémon,” a popular video game.  I tried one on but I fit my whole body into it!  Obviously, that did not fit.  I was disappointed; but it did fit my friend.  One place was trading card area where there were Pokémon trading cards and people actively traded.  There are booths for photos too.  There was a machine where you tried to use a claw to grab toys. 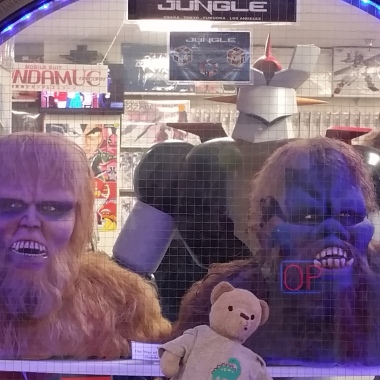 I enjoyed the walk because the walk stretched my legs.  I walked up and got yummy ice cream.  I listened to a guy, named Arthur Nakane, who played the keyboard and sang.

I met someone named Curtis Stewart, who drew an amazing picture of me in a kimono (traditional Japanese clothes).  I was eating ramen noodles that he said were strawberry-curry flavored.  There were napkins in the picture too.  It has my characteristics: calm, sophisticated, civilized and most of all, wise!  He said that this means I will have to go to Japan and get a kimono and that the picture would be my future.  So, I will when I am rich and famous.  In fact, I will have a full wardrobe with lots of clothes.  I gave him the link to my blog so he could see his picture in a post.  I will put it in a frame.  He showed me pictures that he drew and said to be a good artist, you need practice and patience.  I can’t hold a pencil, but I could probably have pencils that are small from being used a lot.  I thanked him and continued walking, (with the picture).

I saw lanterns when I drove to the shops.  I suggest going to Little Tokyo if you are in or near L.A.  You now should get an idea of what is in Little Tokyo.  I enjoyed it a lot and hope that you get a chance to go there.  I hope you enjoyed the post and look at my other posts.

If you liked hearing about Little Tokyo, I am eventually doing a post on Iceland.  So, I will keep posting and good bye for now.  But, who knows where I will go next?