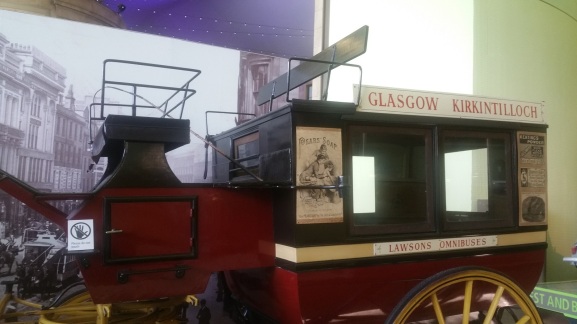 There were lots of ads on old carts

The ship sails are huge

A ride on another cool vehicle

Tiles and real wood on the old subway 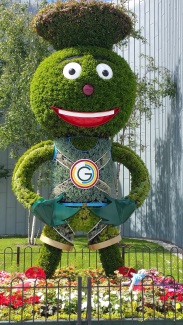 Wheelchairs are a form of transport too 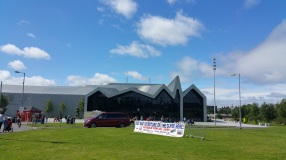 Sneaking up to the top level of the bus

After returning to Glasgow, I decided to go to the Glasgow Museum of Transport, otherwise known as the Riverside Museum.  So, in the morning, I left my flat and walked to the subway station.  When I arrived at the station, I scanned my subway ticket and hopped on the subway.

I took the train to the stop closest to the museum, Partick station, and hopped off the train. I directed myself on the phone and found that it would be a short walk to the museum.  The walk to the museum was really pretty.  I even got to go on a nice bridge that crossed the River Clyde. In the middle of the bridge, there were dates related to the history of the bridge.  So, I learned about the past of the beautiful bridge.

I cautiously crossed the freeway, walked down the sidewalk and ended up outside of the museum. Now, when you look at the museum, you get a good first impression. It is a funny shape and there is a huge boat next to it on the River Clyde.

I walked inside and got an awe inspiring view of the museum.  From the front, you could see cars, something that looked like an old bicycles and buses.  One of the buses I saw looked pretty cool.  I climbed to the top and looked down, as someone who was riding on it would have done.  I wish I could be driving the bus.

The next thing I saw was a green car.  It was an emerald shade of green and was an older model car. The car was there because it was one of the first closed top cars in Glasgow. Many people thought it was better to have open top cars and that was what most people who had a car had. However, in the 1920’s, there began to be more and more closed top cars and eventually that was more popular.  It might have been because with all of the rain and clouds in Glasgow, it is not exactly a good choice because you could get completely soaked.

There was a main street which was a bit separated from the rest of the museum.  There were a bunch of replicas of shops on the main street; so I looked around each one. I saw a sign that said “Subway”; but before I went inside, I noticed a carriage with a fake horse attached.  What was shocking about the subway train was that the seats were made of nice wood and there was tiling on the walls.  I think that if I lived when it was operating and I had the opportunity to go on that subway car; I would hop on and take a long nap.

In the museum, there was a curved wall with a bunch of motorcycles.  They looked like they would be fun to ride on, even though, they probably didn’t have gas in them at that moment.  A few of the motorcycles were Italian.

On my way out, I saw a tall ship.  I tried to calculate how many of myself I’d have to stack on top of myself to get to reach its height.  I didn’t get on the boat; but I did look at it.  It was wood and it looked like a pirate ship.  So, if you go, look out for the ship.  Captain Nounours might steal your loot!

Sure, this blog is about the travels of a really cool bear (if I do say so myself). But, as long as you have a big heart and want to learn about the world as I travel, you are welcome here! A. would tell you that I'm her very best friend. But, she has lots of other friends too: humans, dolls, bunnies, dogs, cats and even dragons! So, you're welcome here, whether you have skin, scales or fur!
Loading Comments...
Comment
×
<span>%d</span> bloggers like this: